Breaststroke is often thought of as one for the seniors, the image of the elderly lady gliding elegantly over the top of the water so not to discolour her blue rinse. In reality, this is a long way from the truth and these 5 tips below will transform your breaststroke technique into an efficient stroke that looks a lot more powerful than prehistoric.

Breaststroke is a leg dominated stroke and a strong leg kick should provide around 75-80% of the forward movement.

When you think about that figure, it should start to change your view on what the breaststroke ‘pull’ is really there for. The pull should end up being more of a squeeze and its main purpose is it to put you in a positive elevated position ready to attack the drive into your glide.

“When fatigue starts to build, elbows tend to flare out making them the widest part of the body, make sure you keep you arms as tight as possible to reduce frontal drag.” 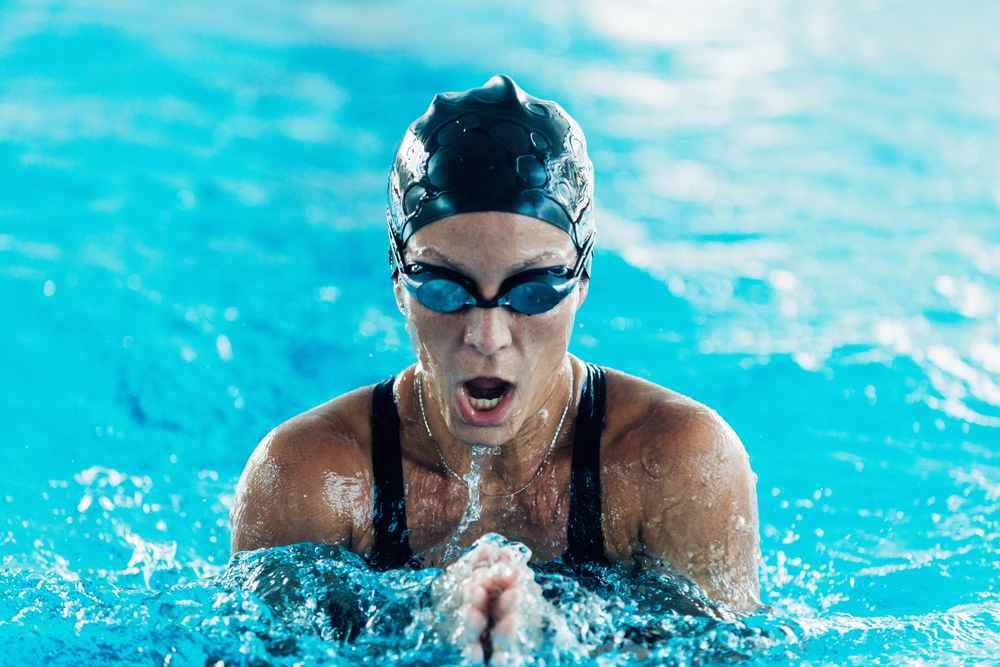 Breaststroke is the most inefficient and slowest of the four strokes and because of this, the emphasis on reducing resistance becomes absolutely vital in ensuring a technically sound stroke.

One way to make sure resistance is minimised is by making sure you keep the hands as tight as possible at the front of the stroke. If the hands separate, due to either a result of poor practice or fatigue this will cause massive frontal drag and seriously minimise the forward momentum gained from the kick and drive phase of the stroke.

Another area of the streamline position that can increase resistance are the elbows. When fatigue starts to build the elbows have a tendency to flare out making them the widest point of body.

As you enter into the streamline position it should almost feel like you have screwed your elbows inwards so that your biceps on the inside of your arms are facing upwards. This way the elbows are facing downwards and you can guarantee they aren’t going to flare outwards as your heart rate starts to build.

Time spent in the glide position on breaststroke is always a difficult one to judge. Do you hold the glide too long and risk losing momentum? Or do you rush the glide phase and break the streamline position early? The reality is a couple of tenths of a second either way could have big effects on speed.

Here’s a great drill you can practice to improve your glide phase, courtesy of GO SWIM:

The speed of an individual breaststroke stroke can range anywhere from 1 to 2 seconds depending on the style of stroke and the event and distance but the main factor determining how long the glide should be held for is a question of when the stroke starts to lose speed. If you look at most major championship finals on a 100m breaststroke, swimmers will hold a stroke rate of around 1-1.2 seconds per stroke. On the 200m breaststroke the field will hold a stroke rate of between 1.6 – 1.8 Seconds per stroke.

The main fault seen in grassroots swimming surrounding the glide phase is breaking out of the streamline position too early. I have seen a lot of self-taught breaststrokers in my time as a swimming coach, in leisure centres up and down the country. It is very rare that I ever see anybody over glide. It is usually rushed and prematurely broken, as the swimmer feels they need to get quickly into the next stroke.

If you look at the figures mentioned previously about the percentage of forward movement from the legs and arms it should tell you that rushing the glide to get back to the pull has a negative effect. The Pull and Glide should be set up to assist your kick and that involves quickly snapping the elbows back into the ribs and then getting into the tightest streamline position possible and holding it so that the power created from the kick is utilised as much as possible.

“Use fast hands through this position to avoid a dead spot in the stroke.” 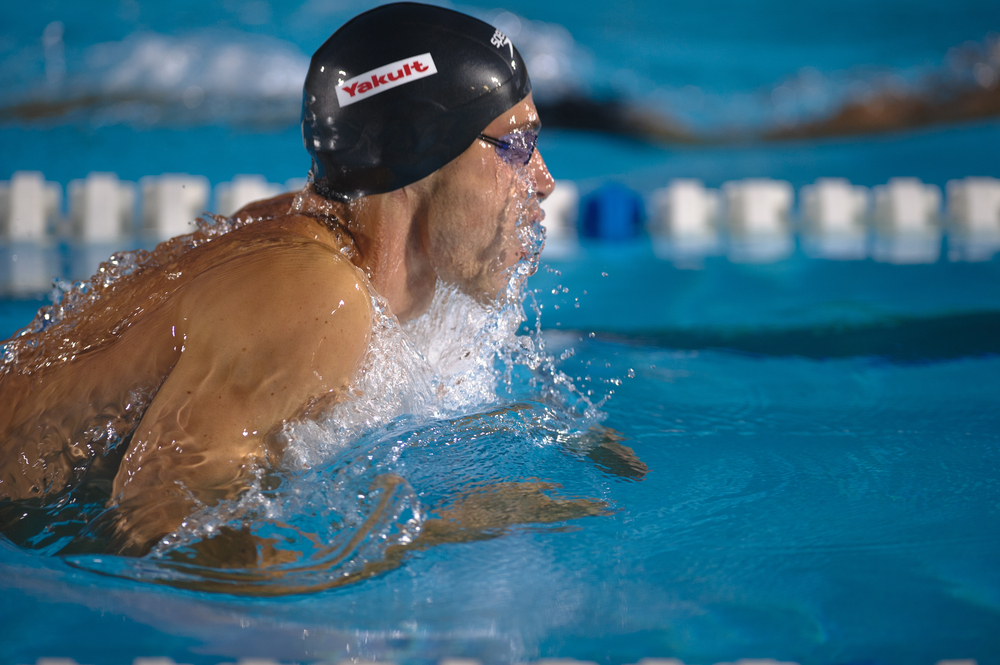 Fast hand speed on breaststroke is essential to ensuring a smooth stroke. Swimmers can often get the hands stuck just in front of the body and this is breaststrokes metaphorical ‘no man’s land’. When the head is at its highest point in the stroke and the hands are just in front of the rib cage, neither the legs nor arms are creating propulsion. The hands have just stopped pulling and the legs are coiled ready to kick. If the pause in this position is too long, it can create a ‘dead spot’ in the stroke where the swimmer starts to slow down. We want to try and avoid this as much as possible and making sure the hands move quickly through this position and out into streamline before the kick will ensure a much faster and more efficient glide phase. In order to get the hands away from the body quicker, you need to keep them out in front of the body. The further you pull back the harder it will be to get them moving forwards again.

The direction the hands should drive through into a glide position often splits opinion. I personally feel the hands should ‘skate; across the top of the surface. If the hands go downwards into the water then it becomes too difficult to get the head quickly into the glide position as you find your head almost chasing the hands away from the body. If the hands recover too high over the top of the water you are increasing the distance that they are travelling to get back to the glide position. From the hands being tucked up against the ribs they should drive out parallel to the water making it much easier to force the head down into the gap that appears in front of you and also reducing the resistance created from pushing them through the water.

Increased speed and power in the glide phase is the main contributing factor towards a high number of world records in breaststroke events. The stroke has dramatically evolved over the last 15 years and as a result the world best times have moved on tremendously. The winning time from the Sydney Olympics in 2000 (Dominico Fiaravanti – 1.00.46) would have come 15th at this year’s Olympics in and is a massive 3.33 seconds slower than this years winner (Adam Peaty 56.13)

One of the main reasons Adam peaty has been able to take that mark down so far is a combination of an incredibly powerful kick and the use of the head to increase kinetic energy through to the glide. The average human head weighs around 11lbs, which when you drive that forward at speed can rapidly increase the force created from each stroke cycle. Now don’t get me wrong, Adam peaty isn’t just the fastest breaststroker in the world because he has the biggest head…. without the power from the leg kick and the exceptional efficiency in his glide the additional force would be lost.

“Maintain narrow knees through the kick.”

One key area where speed can be lost through the kick is the knees flaring outwards. Most swimmers will try and widen the knees in an attempt to increase the power through the kick. However, when you widen the knees, it becomes increasingly difficult to keep the kick rate high. As the rate of kick starts to slow down, it will become out of sync with the drive of the head into the streamline position.

The heels should be pulled back quickly and as they reach the top of the kick, the hips should be parallel to the surface and the feet should be turned outwards ready to strike. They will then kick downwards with a whipping action maintaining a narrow knee position. It should almost look like the knee rotates outwards to create the most powerful kick possible

At the end of the kick, the feet will then finish pointed ready to start the next kick. To get the hips parallel to the surface you must have great control of your core and pelvis and lift the hips up to the surface as you draw your elbows in on the pull.

Breaststroke is a stroke that is dependent on great understanding of your body position. Most breaststrokers will spend more time training drills that focus on select areas of the stroke than they will on full stroke. Without the successful timing and combination of the leg kick and the drive of the hands forward, the stroke will create large amounts of resistance. And it is the coupling of these two movements that makes or breaks a breaststroke technique. 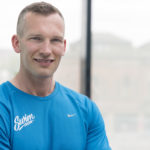 In 2016 I saw an opportunity for a new swimming company that did things a little bit differently and here we are almost 4 years later, having built a family of teachers and clients that we are all really proud of.

Search our swimming knowledge base. If there’s something you can’t find, please get in touch and one of our experts will be able to help.